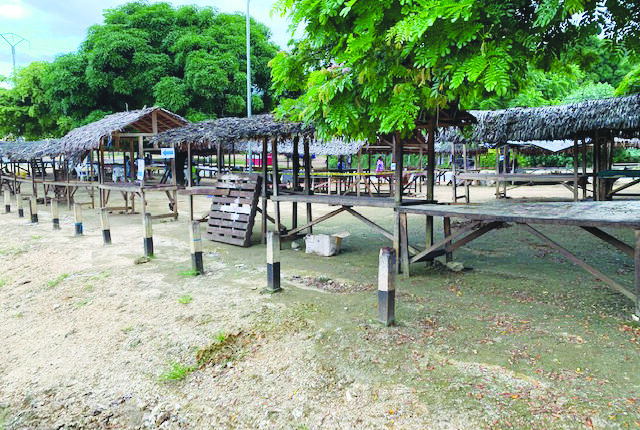 Covid arrives in the community

On 04 March 2022, an active COVID-19 case was confirmed at Vila Central Hospital who had no travel history, indicating transmission at community level.

On 6 march a Declaration of Public Health order was signed by the Minister of Health at the time. The order was for an immediate lockdown of Efate and Offshore islands. Non-essential businesses were to cease operating and all inbound and outbound domestic travel including inter island shipping stopped. A curfew was applied from 6pm to 6am for 72 hours.

Non-essential businesses closed operations while those considered essential implemented protocols to minimize the spread of COVID. Those that were able to, began working from home. There was widespread concern and panic with reports that many workers in the public sector and essential services were not coming in to work and electing to remain at home.

Long queues for weeks were seen at the Convention Centre that was used for the Vaccination Rollout.

As part of the lockdown, Police set up road blocks at Korman, Pango, Salili and Rangorango on the outskirts of Port Vila to control the movement of people and enforce the curfew.

Village communities also began setting up road blocks restricting the movement of vehicles and people. Ifira island was placed under lockdown by the Chief stopping all movement of people on and off the island and grounding all water taxis.

The effect on local businesses was dramatic as commerce ground to a halt. The local markets were empty and rumours of a hard lockdown created panic buying at Au Bon Marche. Commercial Banks continued to operate but with reduced levels of service and reported that commercial activity from their client base had greatly reduced.

in many employees of businesses left without income. The direct result of this was that many ni-vanuatu workers who were dependent upon wages to put food on the tables for their families were left without any income. Some employers who recognized this problem continued to pay staff while some elected to give advances to staff or placed them on annual leave. Unvaccinated staff who wanted to work were told to get vaccinated first before returning to work.

Daily cases continued to increase affecting many business operations, with many reported cases of staff being infected and remaining isolated in their homes.

Meanwhile, the public sector continued to operate with many public servants supposedly working from home on full salary. Despite this, Government services to the public ground to a halt in the midst of rising cases of infections in the public service, especially those that were in the front line.

The market houses which were a source of local food produce for Port Vila residents closed at the start of the lockdown. When they eventually re-opened, very few vendors were seen selling produce in the main markets. Most of the produce sold at the markets come from farmers in the Teouma Valley and North Efate. The VBR spoke to the market Managers and the feedback was that this was due to a combination of factors

– Standard Protocols for COVID meant that a limited number of stalls were possible for each of the locations. At the Port Vila market only 40 vendors tables were permitted. At the Freswota market, the number of tables were only 20 and the Manples market it was 18.

– Many of the market mothers were just frightened to come to the market to sell. Some were unvaccinated and according to the rules made by the government only vaccinated vendors can come and sell their produce at the market.

– Some vendors from North Efate have not been able to come in to town due to strict protocols on leaving their villages being imposed by Chiefs.

To compound the supply problems at the beginning of the lockdown, market produce (mainly root crops and kava) that was arriving by ship from the outer islands to Port Vila stopped due to the temporary ban on inter-island travel. Many Port Vila residents who are from other islands in Vanuatu have produce sent to them from their family in the islands. This source of food stopped temporarily, placing increased demand for locally grown produce, until shipping resumed. The increased demand on Efate grown produce applied pressure on prices.

When markets were eventually allowed to re-open, the roadside markets on the road to Teouma starting from Korman, slowly filled up with Vendors. People looking for fresh vegetables needed to travel to markets outside of the Municipality. It was clear that there was a logistical problem and the availability of fresh produce was not the issue. The problem was how it was getting to market and how the supply of this was affecting prices. Consumers who had money to spend were left desperate to purchase fresh produce and as a result, prices for vegetables, dry coconut, root crops that were in short supply at shops and available outlets increased. There were reports of bundles of island cabbage being sold for 300 vatu, when the normal price was VT200. Some entrepreneurial individuals set up their own produce outlets by travelling directly to the farmers, purchasing at the source and reselling in Port Vila at higher prices. There was never a shortage of demand.

In Santo, the Department of Agriculture and Rural Development (DARD)’s embarked on assisting local farmers sell their local produce through the Food Security and Agriculture Cluster (FSAC) in Santo working with the Area Administrator to mobilize local farmers in the Eastern part of Santo.

On the 20th March, new orders were signed by the Minister of Health. These orders changed the dynamic of the Lockdown. Whilst the 6pm to 6am

curfew remained, the main change to the new order, as confirmed by the Director General of Health to the Vanuatu Business Resilience Council, was to allow non-essential businesses to operate from the hours of 6am to 6pm. Emphasis was placed on the strict adherence to protocols of mask wearing in public, social distancing and hygiene. There were heavy fines for breaches.

Businesses were able to now operate as normal during the day. Despite this, business activity in Port Vila remained extremely depressed due to a combination of low confidence and staff absentees. The Vanuatu Government which is the single largest source of economic activity was noticeably absent in its dealings with the private sector with many public servants working from home.

On March 11, in response to the economic situation unfolding and hardship faced by many workers, the Vanuatu National Provident Fund (VNPF) Board met and approved for the management of the Fund to allow members to apply for the Emergency COVID-19 Assistance Scheme (ECAS). This was VNPF’s initiative to assist members during the COVID-19 pandemic. An amount of VT300 million was set aside for this scheme, which all eligible members would be able to apply for.

The Daily Post reported in its March 26 issue that to date, a total of 2, 232 loan applications have been approved with more being processed that weekend, according to the GM of VNPF, Parmod

Achary. He said at the time that the total amount paid to members has already passed VT50 million.

In addition to the VNPF ECAS, on the 25 March the Minister of Finance and Economic Management, Johnny Koanapo, announced that the Council of Ministers in a meeting had approved the third economic stimulus package worth VT1.2B to assist small to medium sized businesses that had been impacted by the lockdown. The third stimulus was a continuation of the package that was implemented in 2021. Under the third stimulus, the systems that were in place for the processing of subsidy payments would be the same. Of the total VT1.2 billion, VT300 million would be allocated for Employment Stabilization Payment, a VT255 million tuition fee subsidy to support parents on Efate and Santo affected by this lockdown, VT450 million for Small and Medium-Sized Enterprises (SMEs) Grant and the rest for Shipping Subsidy, Root Crop and other commodities.

The COM has also authorized the Minister of Finance to suspend or waive the tender procurement process on projects less than VT10 million,

and that “If the situation worsens in the coming months, then the Minister of Finance can also waive the procurement process on projects worth over VT10 million. This is to ensure projects can be speedily implemented to support economy,”

When announcing the additional economic relief package the Minister

said the country’s cash position is quite strong because of the government’s prudent handling of the pandemic and the economy.

Vanuatu Business Review » Jufelie’s frozen food is proof that you can make a business out of anything if you are innovative.

Captains must be responsible in decision making