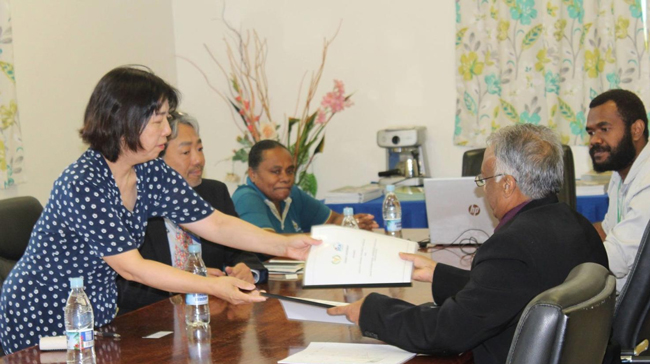 A new agreement has been signed for the Japan International Corporation Agency (JICA) to remain as a tenant of the Vanuatu National Provident Fund (VNPF), after the previous agreement expired.

JICA has been occupying space in the former Air Vanuatu Building next to the National Bank of Vanuatu (NBV) in the centre of town for rent for a long time.

The building is one of the properties of VNPF generating monthly profits.

JICA has been paying a rent of more than Vt2 million every three months in advance, the General Manager (GM) of VNPF, Parmod Achary, revealed.

“JICA continues to be one our (VNPF’s) premium tenants. This new agreement which begin in June this year will last for another 10 years,” he said.

“The security system in the building has been upgraded and renovations will be carried out to change the look of the building.”

GM Achary said the VNPF Board has agreed for contractors to make their bid through the tender process for the building’s renovation works.

According to GM Achary, the first tenancy agreement between VNPF and JICA was signed in 2006.