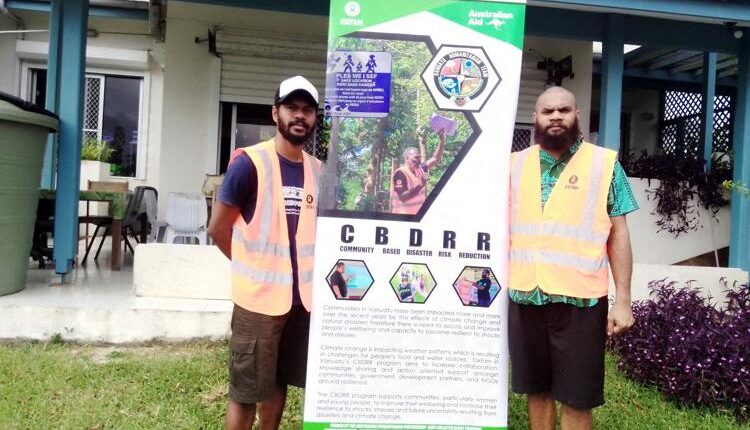 “We are starting to see that Community Disaster Climate Change Committees (CDCCCs) are now including women as members of the committees. In the past only men were involved but today more women are included in the committees taking up important roles,” he said.

He said communities are starting to integrate gender inclusion into their recruitment processes and their meeting spaces.

“We know that women’s roles in disaster preparedness and responses are very important and so we try to push for gender equality in the CDCCCs set ups. Women and girls must be involved.”

“People are now motivated and taking up initiatives to build community evacuation centers to prepare for disasters,” he said.

He said recently the Eton Community on Efate have been raising money to build a community evacuation center and that is how the disaster ready program is motivating people to take up initiatives to prepare for disasters. Erangorango Community through their CDCCCs took the initiative to grow a garden and are now harvesting food from the garden to make money to assist families in the communities during disasters.

“These are the things we want to see happening in the communities, change of hearts, and change of mindsets of community leaders, community members and CDCCCs members. People taking ownership to prepare their communities for disasters,” he said.

“Community owned projects or community owned activities are the ones that can last. If we go into communities to try and push them to do things without them having the heart to do these things, the programs won’t last in the communities,” he said.

Pakoa says if communities take ownership of any projects or activities then the projects will sustain.

Monitoring Evaluation Officer at Oxfam Vanuatu, Sairos Maltok, said for the past ten years people don’t have enough knowledge on disaster preparedness but now major changes are happening in the communities as people come to understand the importance of disaster preparedness.

“People are starting to understand disaster risks and what they should be doing to prepare and respond to disasters,” he said.

Maltok said in this recent COVID-19 community outbreak, communities have responded effectively and were able to work closely with the health authority.

“Most of the CDCCCs took their roles seriously during this COVID-19 outbreak which is helping the authorities a lot,” he said.

Pakoa says the Cyclone Pam in 2015 came as a wakeup call for everyone in Vanuatu, especially the NGOs working in the humanitarian sector and the government to upscale their disaster preparedness activities.

“People’s knowledge on disaster risks and disaster preparedness have increased a lot after Cyclone Pam, I think programs such as the Australian Humanitarian Partnerships Disaster Ready Program in Vanuatu, is really needed in the years to come to continue building communities capacities around disaster ready,” he said.

“Even though Oxfam is not working directly with the Ministry of Health to respond to the COVID-19 situation, we are very happy to that the Ministry is utilizing the structure we have set in place, especially the CDCCs.”