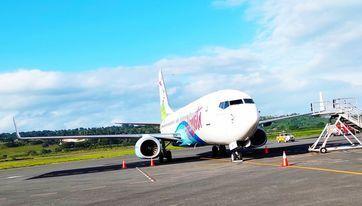 The Santo Tourism Association (STA) is looking forward to the recommencement of international flights, particularly from Brisbane, Australia to Pekoa Airport.

Air Vanuatu confirmed that discussions are ongoing for resumption on direct international flights throughout three of the country’s terminals, these will be confirmed after July.

According to the STA, the directed flights were stalled in 2019 due to aircraft maintenance and later clashed with the country’s international lockdown as well. The Association mentioned that currently Air Vanuatu offers only connected flights to Santo.

In the past, connecting flights at times may be an expensive exercise when flights get delayed or are full, depending on the domestic market.

There were quite a number of concerns also raised over Air Vanuatu’s flight schedule to Funafuti, Tuvalu particularly within the tourism sector. The STA stated that if Brisbane flights resumes in Santo, it will be a boost for tourism operators based on Vanuatu’s biggest island.

The Association is hopeful that by the end of the year, there will be some rescheduled flight plans. The STA affirmed that once bookings are set, it will assist Air Vanuatu’s decision making in resuming Brisbane flights to Santo and Tanna.

With the government recently signing a VT7 billion contract with the Chinese Civil Engineering Construction Corporation (CCECC)for the extension of the Pekoa Airport runway, it will be a boost for Santo tourism and a must to receive international flights in the near future. As the Bauerfield runway was recently flooded by heavy rain during cyclone Gina, Santo could be an option for direct flights if a similar situation occurs again.

There are plans as well for Vanuatu to support direct flights from Asia, especially once the extension is complete.