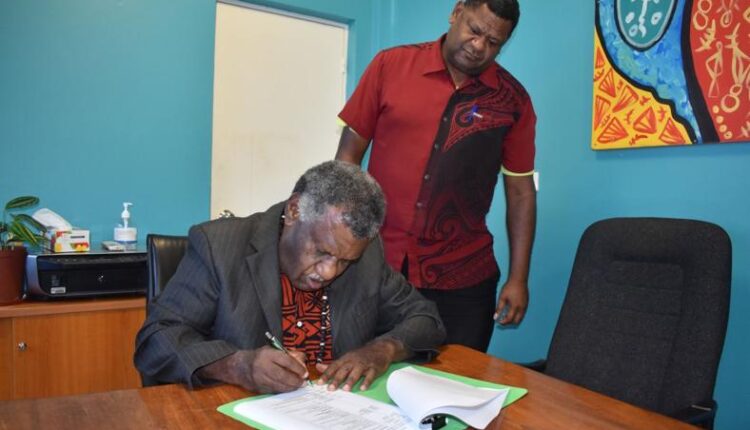 The Vanuatu Foreign Investment Promotion Agency (VFIPA) is now headed towards achieving a Management Information System (MIS) by the end of this year. This will significantly improve its services to its clients.

Minister for Tourism, Trade, Industry, Commerce and Ni Vanuatu Business, James Bule, signed the official contract for the commencement of MIS development on the 15th of February at the VFIPA premises.

In his remarks, Minister Bule stated that he was very pleased to be part of the signing ceremony to signify a “historic achievement” for the Agency in the development of its MIS.

“I was the first Minister to take the initial Investment Promotion Bill to the Parliament, which saw the establishment of the agency and I am happy to be signing this contract today to mark the shift in which the office has achieved since its establishment,” he stated.

The Minister continued to state that with the world’ s current digital era it is important that an agency such as VFIPA be proactive in making use of promotion tools such as the MIS, in order to take part in the global FDI pool of funds.

VFIPA Chief Executive Officer (CEO) Howard Aru, who was also the first CEO of the Agency in 1998 after the office was established, also expressed his delight in the achievement of a digitized registry.

“This project has been a long-standing issue and we are grateful that it can finally be achieved through the support of the Australia-Vanuatu Governance for Growth (GfG) program and the Vanuatu Aid for Trade Management Unit,” he stated.

The development of the MIS was awarded to a NZ tech company, Zest IT with the support funding through the GfG program managed by the Vanuatu Aid for Trade Management Unit (VAMU).

Initial work to develop this system will commence in this first quarter of 2022 and the overall project development phase is scheduled for the next six months with a prospective end date for September 2022.

The project is valued at VT23 million and it will feature an online registration portal that foreign investors will have access to for the first time since VFIPA was established in 1998.

The MIS will enable data registration and processing of investor information in a more efficient and effective manner and it will, on the whole, move all current manual processes into automation and digitization.

The Agency has long anticipated the development of the MIS for the efficient delivery of its services especially during these times when reliance on technological advancements is a must.

With an MIS in place, it will further improve the Agency’s adaptation to the current COVID-19 scenario whereby working from home may become a future possibility for the Agency.

VFIPA is grateful for the funding and support from the Government through its parent ministry, Ministry of Trade, Tourism, Industry, Commerce and Ni-Vanuatu Business.