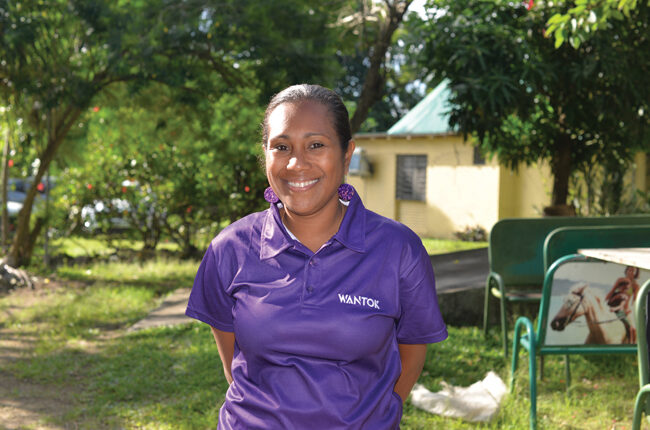 Esther Maximo is a dynamic member of the WanTok team. The technical team manager has much experience managing the day to day workings of the company. A vibrant, driven woman with numerous aspiration who stands tall in the face of challenges and strives to learn in her ever day job.

According to Esther, she started off as a sales and marketing executive at WanTok. Her job has expanded to managing the service team, which means organizing each member schedule for the day. The team has 5 dedicated technicians on board that ensure all of WanTok’s customers are satisfied with the service it provides technically.
“The team is very good at their job, they are dedicated and do their jobs and work so hard. It is a really good team so it is easy working with them. We have a very strong team overall at WanTok that support the technical team” Esther stresses.
At the end of everyday Esther checks on the work done with her team and sees what needs to be done the next day. As a team player, she enjoys her job. Esther shares that much of her work is done with her own business on the side as she has started her own Air BnB despite her busy schedule.
“I enjoy having a lot of things to do on my plate. I like to be busy, when I am not busy I am bored” she says
Esther’s route to her success is far from orthodox as she says;
“I am an ex Malapoa student. When I finished High school, I did not continue on to university, I went straight to CNS and took computer classes. When I was done there, I went straight to Digicel.”
The dynamo is no newbie to management. Esther shares that she worked 5 years at Digicel. She spent 1 year in sales and after that she was promoted to flagship store manager. A job she did for 4 years until she resigned. From there she applied her skills at Hospitality food & beverage when adventure called Esther answered as she took her next job diving at Big Blue and when WanTok started she joined the team and has been there ever since. According to Esther the typical work day at WanTok is one that encourages everyone to help work towards solving issues.

“We try not to stress anyone out at WanTok so we all pitch in to resolve issues. So, from 8am-5pm that is what we are doing. Every day we have one person on the technical team on call 24/7” she says.

As a person that loves being challenged Esther states that her favourite thing about working at WanTok is that every
day she learns something new when it comes to technical work and this has been knowledge that has been helpful
to her home.

Esther shares her beliefs in what WanTok stands for as it is working hard to expand its coverage as she says; “WanTok has an important Job right now as it is trying to expand coverage around Port Vila and delivering fast internet to
people for cheap and affordable price. I am excited to be a part of WanTok’s journey in providing these services”

Vanuatu Business Review » The Vanuatu Government, Ministry of Finance and Economic Management published its half yearly Economic and Fiscal Update